Catching up with our Student Sculptor 2017 winner

In May last year, metals4U launched our first student sculptor competition in association with Yorkshire Sculpture Park. The first prize was a place on ‘Brian Fell’s Midsummer Metal Workshop’ worth £270. The course ran over two days and was packed with demonstrations, advice and extensive access to metal and specialist equipment.

To enter, students had to be over 18 years of age and simply submit a picture of either their current or best sculpture or their design drawings to be judged by metal sculptor Brian Fell.

Jessica Smith, a student from York St John University, heard about the metals4U Student Sculpture competition from her tutors at university and decided to apply. Her submission was a piece titled, “Sticks and Tape.” 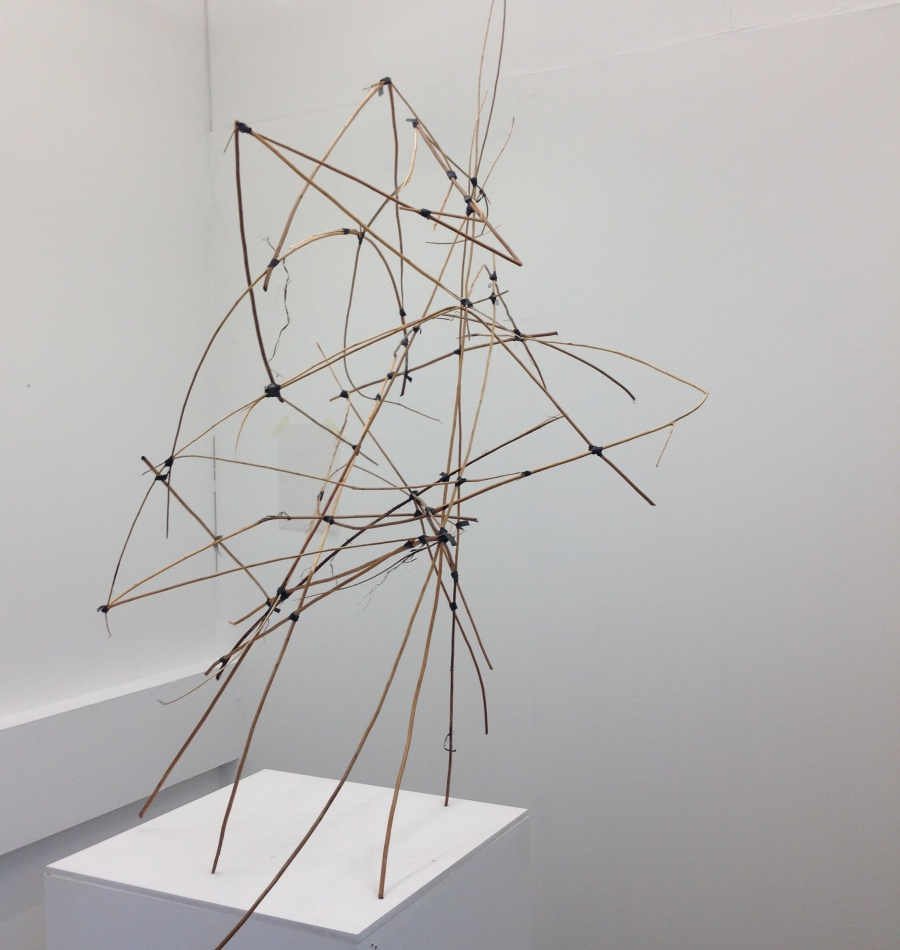 The entries into the inaugural competition were all very strong and showcased a tremendous amount of emerging talent from students across the North of England. Brian Fell felt that Jessica’s entry really stood out by saying, “Jessica had the strongest application and we felt she would benefit the most from the course.” Jessica says she was thrilled to win the competition, especially as she had never entered a competition like this before, nor had she ever set foot inside a metalwork shop. 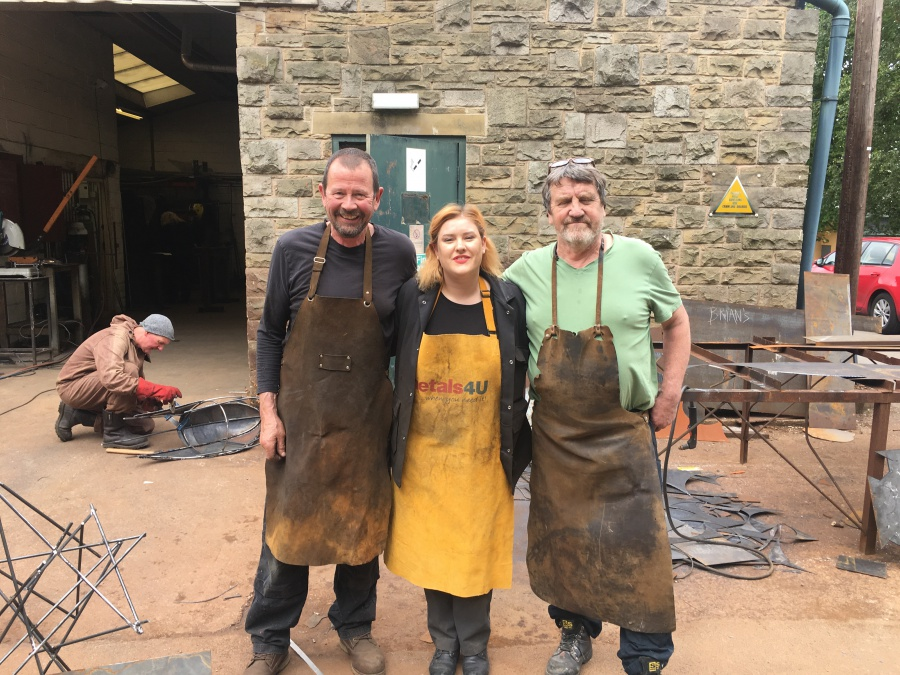 Jessica attended the course in June 2017 under the expert tutelage of Brian Fell, George Fell and Owen Cunningham. Jessica found the course invaluable to her learning new skills, techniques and discovering the possibilities for creative exploration using metal.

The course began by introducing the students to all the equipment and a tutorial on how to use the tools with the materials available. The workshop attendees were then left to explore and experiment under expert guidance and with practical help always on hand. Jessica particularly enjoyed using the plasma cutter and learning how to weld. This is highly evident in the pieces she is now producing.

Jessica was brought up in Huddersfield; a large market town between Leeds and Manchester in West Yorkshire. Jessica’s grandmother, Kate Powell, is an accomplished artist and provided Jessica with her earliest introduction to technique and, perhaps more importantly, the appreciation of art in all its forms. On leaving King James’ School in Huddersfield where she studied textiles at GCSE, she enrolled on an apprenticeship in floristry. After a short while her growing interest in the formal study of art led her to enrol on an Extended Diploma course at Leeds College of Art. On successful completion of her course in Leeds in 2014, she relocated to start a fine art degree course at Bath School of Art. After a year, Jessica decided to return to the north and transferred to study Fine Art at York St John University. York has been a perfect fit for her as she has fallen in love with the city and the location works well for her to create and promote her art.

Jessica’s early work was focused on landscapes that were created on canvas or board by using mixed media such as rust particles, assorted fibres and, as she confesses, “Anything I could find really, just recycling anything I could get my hands on.” Jessica states the inspiration for her work comes from her love of the Yorkshire Dales.

Her work in sculpture also began by using anything she found lying around; sticks, canes, old broken paint brushes and truly random finds can all be recognised in her early work. Jessica is intrigued by balance and creates structures to see just how far she can push the boundaries to find the critical point just before collapse.

This piece, based on her submitted competition entry, was constructed on the Midsummer Metal Workshop using mild steel, however, Jessica is eager to try out weathering steel (Corten) to see just how the oxidation would change the look of her work over time. 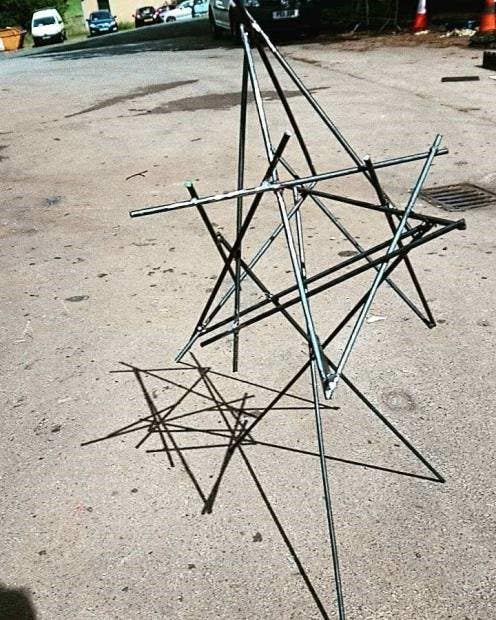 The work she produces now show her inspiration and motivation to demonstrate the transparency of the construction process as an integral component of the final piece.

These pieces have been made since attending the course and show how her metal working skills have flourished and developed to create stunning effects on sheet steel. 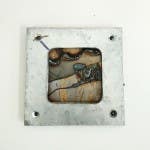 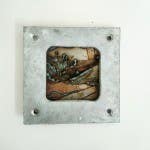 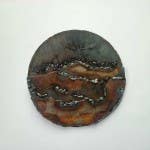 Jessica loves how she can use metal to depict the patchwork effects of the dry-stone walls and fields of the rural northern landscape. 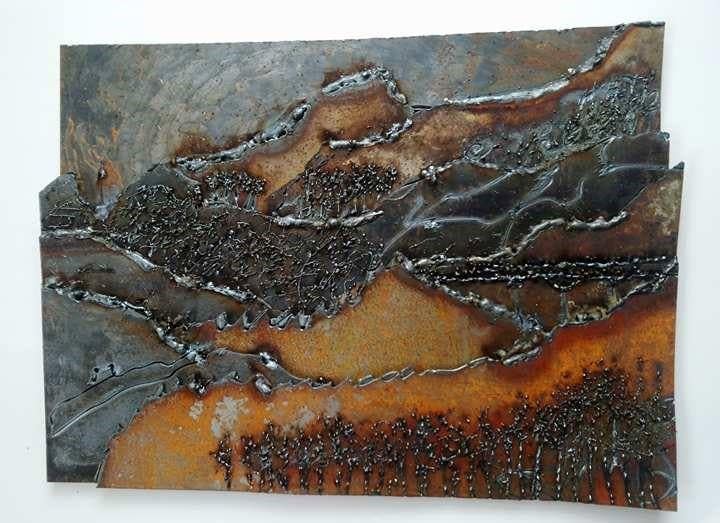 Since attending the metal sculpture course, Jessica has had her work accepted to appear in several exhibitions.

In July 2017 her work was showcased in a charity exhibition in her home town of Huddersfield to help raise money for the homeless charity, “Huddersfield Change project.” In January of this year her work was shown alongside her fellow third year students in the “Arts and Draught” exhibition at ‘Brew York’ on Walmgate in the heart of the city.

Jessica is certainly gaining a lot of respect within the art local art world and has had several pieces of her work selected to be included in the “ Ones to watch” emerging artist exhibition at Sunny Bank Mills, Leeds, which is on until April 12th – it is well worth the visit to have a look at her work alongside that of another  thirty four  emerging artists. If you cannot make it to Leeds before mid-April, the degree show at York St John University that exhibits this year’s graduating students’ work, will be held in York from June 8th. Do pop along if you get the chance.

Within the next year or so, Jessica hopes to do a master’s degree to extend her skills and knowledge, until then, she intends to keep herself active with her sculptures by applying for the ‘emerging artist’ place on the Scottish Sculpture Workshop’s summer residency. If successful, she will get an opportunity to immerse herself for a whole month in developing her sculpture techniques. We wish her all the very best of luck with her future endeavours and metals4U are thrilled to have been involved in introducing Jessica to the world of creating art from metal.